So, the last time I wrote about this project, things weren’t going so well… Indeed, I thought it would be easy to connect Barbatos’ hips to the Saix legs, but the result was less than impressive. If anything, the connection was too stiff and lacked any mobility in several directions, making dynamic poses impossible to do.

To be perfectly honest, that part is the reason why there has been such a large gap between my march and july blog posts. I got “writer’s block” (builder’s block ?) and just couldn’t find a way to make that dang thing work. So I looked at that custom again, and noticed he used Barbatos parts up to the thighs. It’s really hard to see, but when you’ve been staring at the kit on your desk for a month, it just clicks.

Speaking of clicking, I quickly noticed making a connection between the thighs and the Saix legs would be no easy feat. I thought about using magnets, but for a part that will bear weight and be moved around trying to get a good standing position, I knew it wouldn’t hold. So the only logical solution was the tried and true method of drilling holes and using some runner parts. Maybe some glue when all is said and done to help friction do its job.

Here it is. It’s the first pic I snapped, but I had already made several tests with different feet combinations. I’m pretty proud of that one, using the Barbatos ankle guards, Saix feet and some magnets to hold everything together. You can see the Kampfer silently judging me from the corner.

I liked the feet, but not the overall pose / proportions it gave. So I tried with the stock feet. 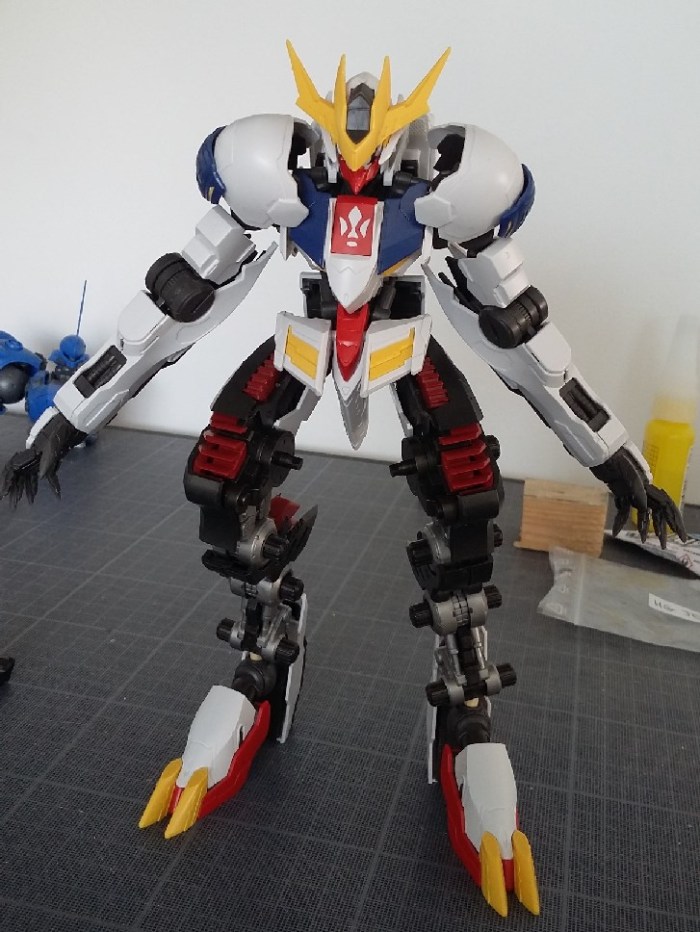 Not THAT bad. I mean, the arms are already pretty disproportionate, so the feet don’t really stand out here. One thing is sure, the overall posture is better with the feet connection facing upwards, instead of the Saix feet’s backward connector. I’d rather have the Saix’s claws for feet, though… 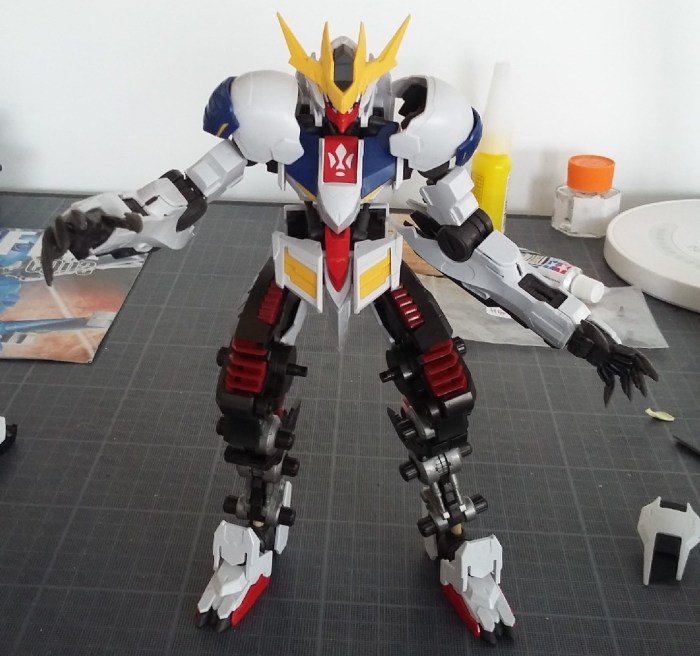 Next try : Barbatos’s feet (regular this time, not the Lupus Rex). The proportion is perfect this time : the connector faces up and the heels are more acceptable. Still, no claws… 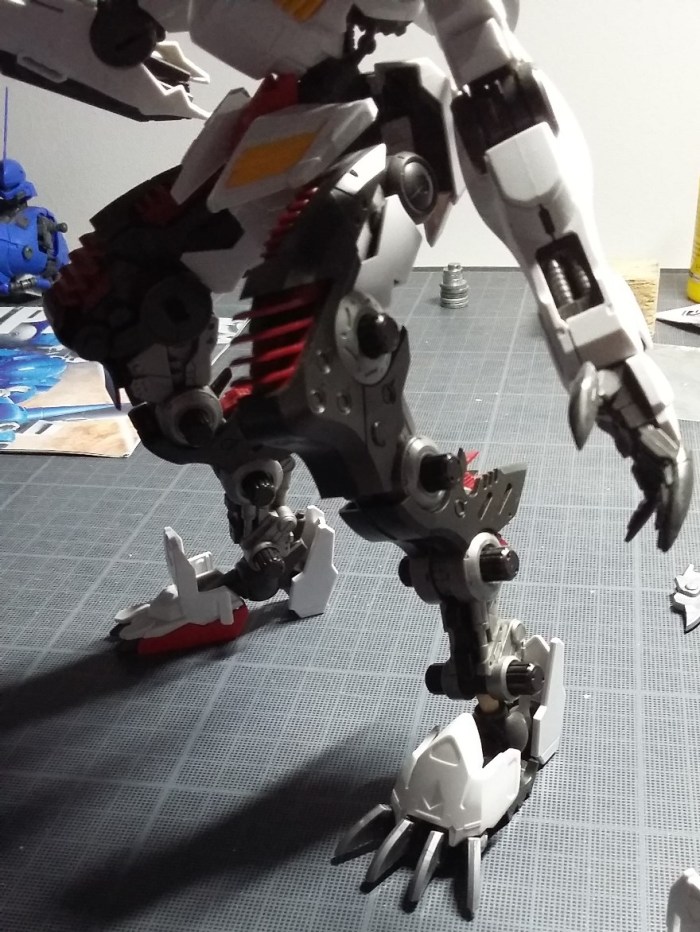 EUREKA ! By mixing the Saix feet with Barbatos’, I managed to get something equally functionnal and visually appealing. I’m pretty stoked about that particular combination, I think it blends the two kits together really well and doesn’t look like a mish-mash of parts slapped together for the sake of kitbashing. Even better, it only requires minimal modifications to work : I only need to shape the Saix male foot connectors to fit the Barbatos female foot connectors.

Yes, it did require quite a bit of sanding.

I heard a noise when I was in the bathroom. Turns out sanding wasn’t enough, I had to use putty to reshape the connector in the correct form. The more you know…

That’s about it for today. I didn’t spend all my modeling time playing with the kits feet (only about 90%). I also gave a bit more attention to the hands. You know, by now, that I consider the claws in dire need of sharpening. With closer inspection it turns out it needs something else : filling.

On that pic I’ve started filling the pinky and index fingers. As is now custom, what I thought would be a piece of cake to do turned out to be stupid hard. The fingers are held in a way that makes sanding away the excess putty very hard to do. I usually use a file but this time I’ll have to improvise. On that pic you can also see that the thumb needs some sanding to make the angles more smooth. I can’t wait to prime the hands and find out how much I messed up 😉